The Merck Mectizan Award is given to individuals who have demonstrated an extraordinary level of commitment to fighting river blindness and/or lymphatic filariasis.

DECATUR, GA USA — 30 September 2014 – The Mectizan Donation Program congratulates President Rafael Correa, the Ecuadorian Ministry of Health, The Carter Center and its Onchocerciasis Elimination Program for the Americas, and the Pan American Health Organization on the announcement that Ecuador has been verified by the World Health Organization as the second country to eliminate river blindness, one of the leading causes of preventable blindness worldwide.

A Story From One of My Heroes

Please enjoy this story of the formation of a coalition to fight onchocerciasis, as told by Dr. William Foege, founder of The Task Force for Global Health, to Bill Gates.

On April 2, the United to Combat Neglected Tropical Diseases: A Conversation on Progress webcast and live Q&A will be broadcast live from Institut Pasteur in Paris from 18:00 – 19:30 Central European Time/12:00 – 13:30 Eastern Standard Time.

We’re pleased to share with you an opinion piece from the New York Times“Treating the Village to Cure the Disease” by Jason Silverstein on lymphatic filariasis (LF) elimination in Africa featuring quotes from MDP’s Dr.

How to eliminate river blindness: lessons from Colombia 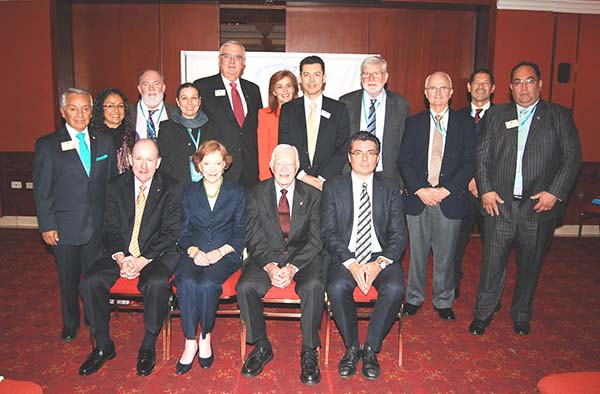 The Mectizan Donation Program congratulates Colombia on its achievement as the first country to receive verification of elimination of river blindness from WHO.

On Monday 8 July, in Cameroon, Sightsavers made a major step towards our goal of eliminating river blindness by 2020 with the distribution of our 250 millionth Mectizan® treatment.

The handbook explains the importance of vector control in national programs, outlines entomological procedures for regular and specific vector control, and describes how data should be analysed for better overall understanding of filarial transmission and vectors.

ATLANTA…The Carter Center announced today that it will no longer only control river blindness, but instead it will work with ministries of health to eliminate it in all 10 countries in Africa and Latin America in the areas where the Center fights the neglected disease.

The World Health Assembly today adopted a resolution on all 17 neglected tropical diseases1. Representatives from 32 countries and six speakers from nongovernmental organizations took part in deliberations of resolution EB132.R7.