Welcome to a new season in the campaign to eliminate river blindness and elephantiasis. Although the events of last year put many obstacles in our path, below you will find news of progress made thanks to the determination of all partners to continue the fight to #StampOutOncho and #eliminated from the planet. 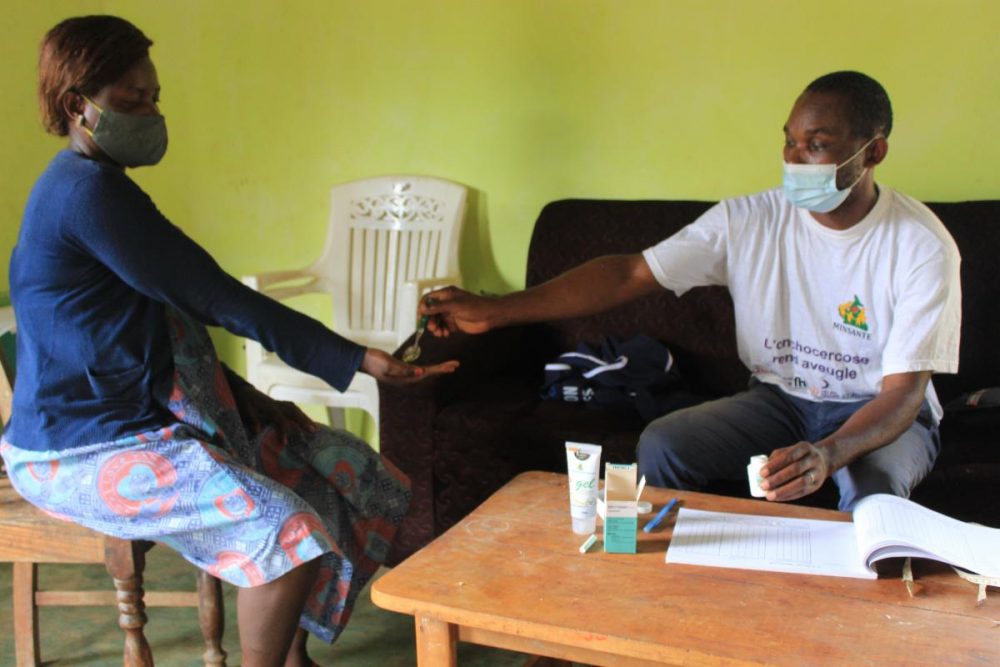 MDA continues despite the pandemic, with safety measures in place

In 2020 MDP announced a special grant to NGO partners to provide supplementary funding for COVID-19 mitigation, allowing important Mectizan® distribution programs to continue safely. We’ve enjoyed seeing pictures of the creative ways partners have found to safely implement mass drug administration, and we welcome any and all additional photos grant recipients are willing to share.

This photo came to us from HKI’s Egbe Bertille Obi in Cameroon. She writes: “Jocelyn #CDD (Community Drug Distributor): ‘I had done my door-to-door round for the day and had returned home when this lady came knocking to get her dose of Mectizan… In the villages it is hard to follow schedule. Sometimes, we get to adapt to reach our target.’”

Thank you to Jocelyn and the many other CDDs who keep the MDA going.

In January, the Mectizan Expert Committee (MEC) issued a statement on the use of Mectizan® during the COVID-19 pandemic which reminds country partners that Mectizan is donated solely for the elimination of onchocerciasis and lymphatic filariasis. Read the full statement here.

“It feels like a family reunion,” noted one of the speakers at the February symposium “The Power of Partnership: Defeating Onchocerciasis.” Hosted by the Task Force for Global Health, the virtual event featured remarks from 29 experts who have contributed to the success of onchocerciasis control and elimination over the years. Panelists shared their thoughts on the long history of the effort to stamp out oncho, focusing on the diverse partnerships that made it possible.

The catalyst for this event was the publication of a new book, Riverblindness In Africa: Taming the Lion’s Stare, written by Bruce Benton. The TFGH originally agreed to host a reception at its headquarters to celebrate the publication, but COVID-19 led to the development of an online event. This provided a rare opportunity to reunite the people responsible for both the early days of onchocerciasis control using vector control and the subsequent scale-up of Mectizan distribution. The scale-up effort led the formation of remarkable partnerships and, ultimately, led the way toward a new goal: to eliminate transmission of the disease. A video of the symposium will be made available soon. For more information, see the event page located here. 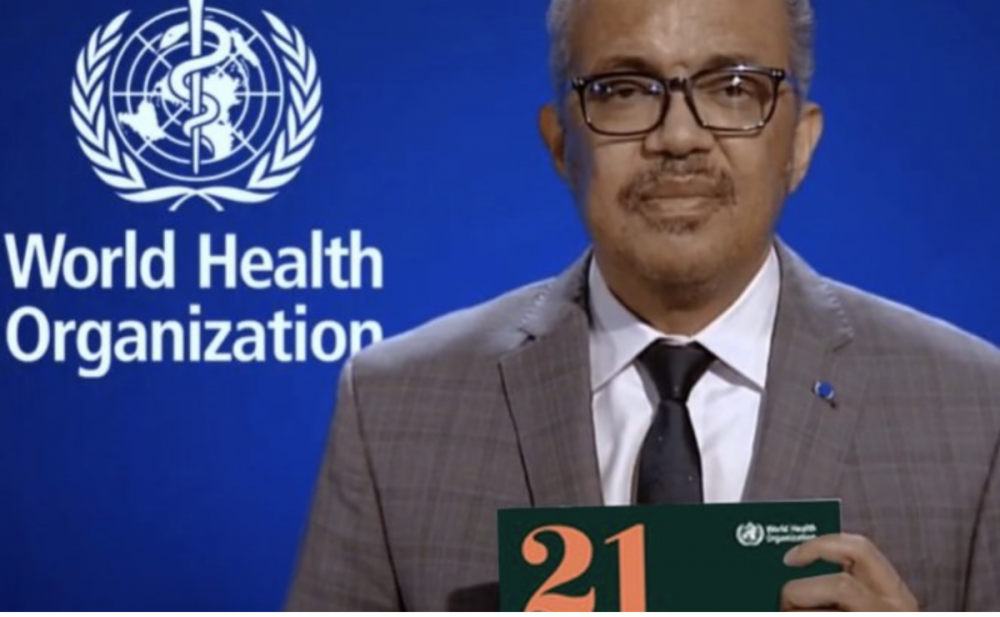 January: the launch of a hopeful new decade in the quest to beat NTDs

On January 28 the long-awaited 2021-2030 NTD Road Map was launched in a virtual event with high-level participation, including WHO Director-General Dr. Tedros Adhanom Ghebreyesus. Entitled “Ending the neglect to attain the Sustainable Development Goals: a road map for neglected tropical diseases 2021–2030,” the document sets global targets and milestones to prevent, control, eliminate, or eradicate 20 diseases, and identifies targets for cross-cutting issues—such as water and sanitation—aligned with the Sustainable Development Goals.

The road map cites three pillars of success for the next decade: 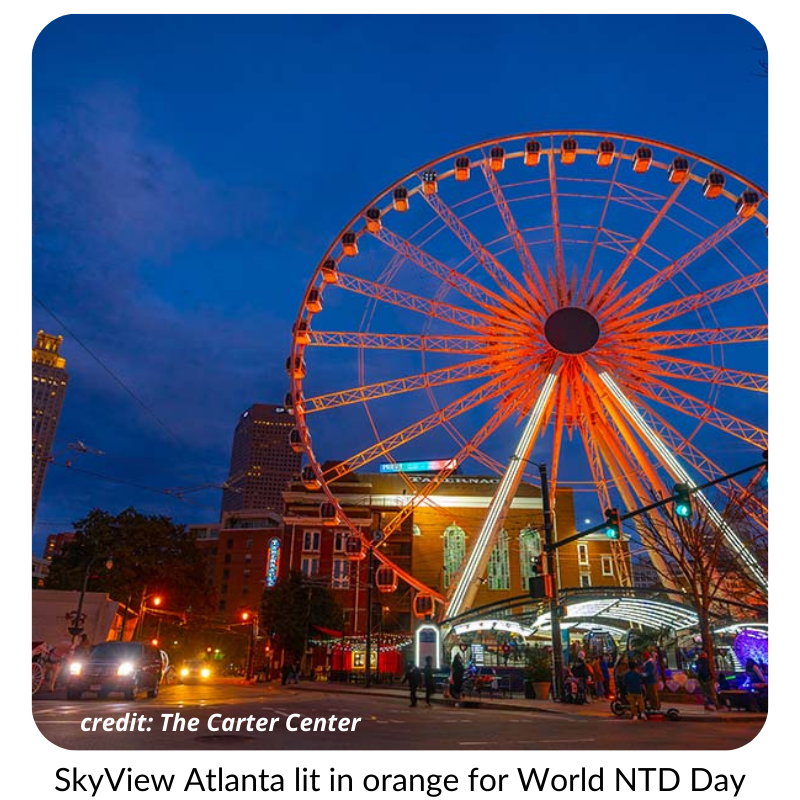 January also marked the second annual World Neglected Tropical Diseases Day on the 30th. To raise global awareness, landmarks around the world—including the Leaning Tower of Pisa and the Sphinx—were illuminated in orange. Many organizations celebrated by sharing NTD information via webinars, roundtables, caravans, and even a watch party.

World NTD Day was originally announced by the Crown Prince Court of Abu Dhabi at the 2019 Reaching the Last Mile Forum. January 30th was chosen because it falls on the anniversary of the landmark 2012 London Declaration on NTDs. 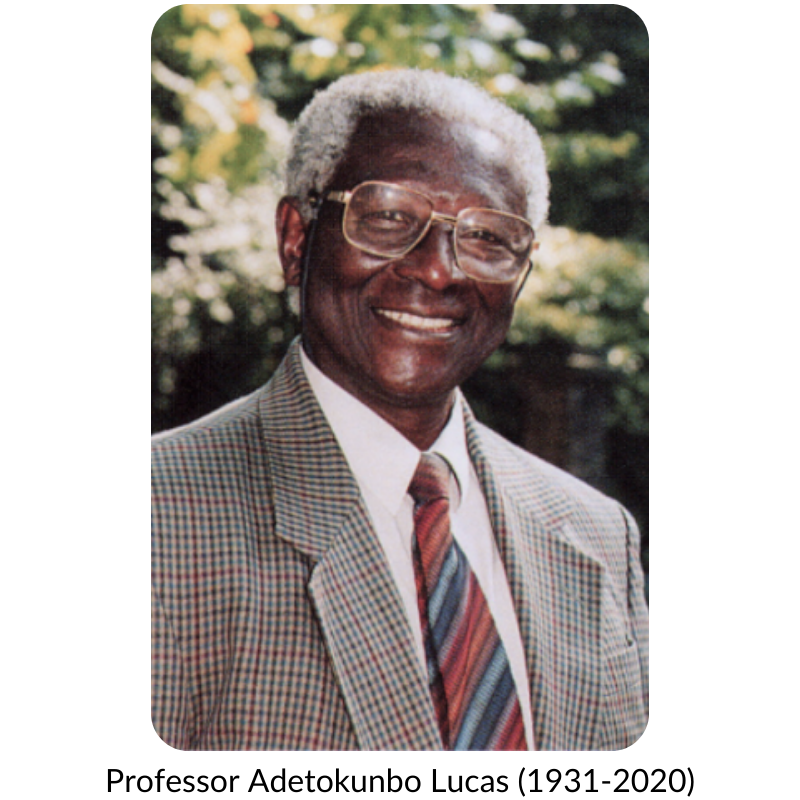 It is with deep regret that we share the news that Professor Adetokunbo Lucas died at age 89 on December 25, 2020.

Professor Lucas was one of the first Mectizan Expert Committee (MEC) members serving from 1988-1992. He was also one of a select few who served on the MEC twice, serving again from 1997-1999.

Prof. Lucas was highly regarded for building scientific research capacity in Africa. Early on in his career, his goal was to practice medicine. After returning to Nigeria from the UK where he received his medical training, Prof. Lucas developed an interest in the disparities between disease prevention in the developed vs. the developing world. He was quoted in a WHO TDR article as saying “I realized people were dying and ill with diseases that could easily be prevented in Nigeria, and that spurred me to pursue a career in public health.”

We remember Prof. Lucas fondly, as he was a very affable and kind man who brought his great sense of humor to MEC meetings. He will be missed.