The vision of MDP is to work with partners to achieve a future free of river blindness (onchocerciasis) and lymphatic filariasis (LF or elephantiasis).

The MDP secretariat is housed at The Task Force for Global Health. The Program was established by Merck to provide medical, technical, and administrative oversight of the donation of its drug Mectizan® to control river blindness in Latin America, Africa, and Yemen. Merck’s commitment is “as much as needed, for as long as needed.”

In 1998, Merck expanded the Program to include Mectizan for the elimination of lymphatic filariasis in Yemen and in countries in Africa where river blindness and LF are co-endemic. 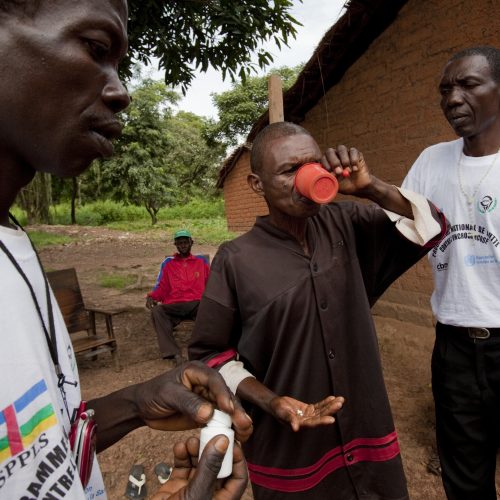 In countries where river blindness and LF are co-endemic, the World Health Organization (WHO) recommends a single annual dose of Mectizan co-administered with a dose of albendazole, donated by GlaxoSmithKline (GSK), to be administered for at least five years to reduce transmission of the disease to the point where it is no longer sustainable. This reduction in transmission is the first pillar of an LF elimination program. Morbidity management and disability prevention (MMDP) make up the second pillar.

Currently, MDP approves approximately 400 million treatments annually for river blindness and LF, where they are administered by community-directed distributors. The donation and distribution of Mectizan and albendazole involve a complex global partnership of WHO and its regional offices, governmental and nongovernmental organizations, local communities, donors, research institutions, academia, and the private sector.

In 2017, in support of new WHO guidelines, Merck committed up to 100 million treatments annually through 2025, expanding the Program into select countries worldwide where the co-administration of ivermectin, diethylcarbamazine (DEC), and albendazole (called “triple therapy” or “IDA”) will help accelerate elimination of LF in countries where river blindness is not endemic.

The potential to eliminate both diseases is not only feasible but increasingly within reach.