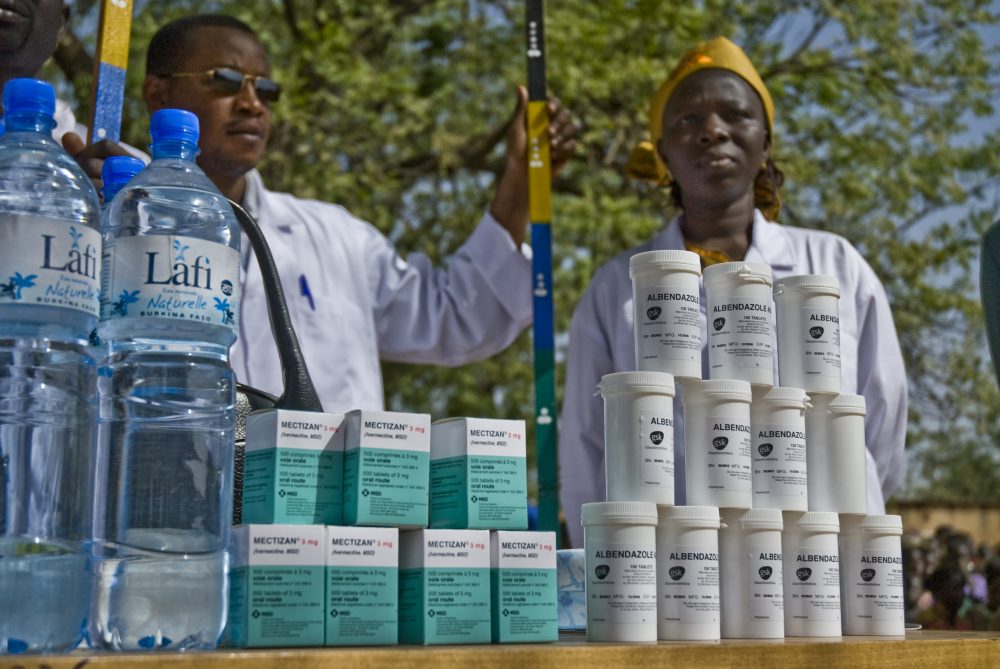 Mectizan® (ivermectin)—donated by Merck & Co., Inc., Kenilworth, N.J., U.S.A.*—was the first drug donated for the control and elimination of a neglected tropical disease.

Before Mectizan, the only safe and effective intervention for river blindness was vector control, achieved by aerial larviciding of the rivers where the blackflies that transmit the disease breed. Similarly, the co-administration of Mectizan and albendazole—donated by GlaxoSmithKline(GSK)—was recommended by the World Health Organization (WHO) for the elimination of lymphatic filariasis (LF) in African countries where the disease is co-endemic with river blindness.

Nobel laureate Dr. William Campbell of Merck Research Laboratories suggested the use of ivermectin (later named Mectizan®) for river blindness (also called onchocerciasis) in humans. Following the breakthrough lab work by Dr. Campbell, another Merck researcher, Dr. Mohammed Aziz, championed the clinical development of Mectizan. Dr. Aziz led the collaboration with WHO in the early 1980s to design and implement field studies in West Africa that ultimately proved the effectiveness of the drug against river blindness.

In 1987, Merck committed to donate Mectizan – as much as needed for as long as needed – for the global elimination of river blindness. In 1998, Merck expanded the donation of Mectizan to be co-administered with GSK’s albendazole for the elimination of LF in African countries and Yemen where onchocerciasis and LF co-exist. In 2017, in response to the new WHO-issued guidelines for “triple therapy”—ivermectin, diethylcabamazine (DEC), and albendazole—Merck further expanded its donation of Mectizan with an additional 100 million treatments to accelerate elimination of LF in countries where onchocerciasis is not endemic.

Mectizan (ivermectin) and Albendazole
In Yemen and African countries where onchocerciasis and LF co-exist, DEC is not considered a safe treatment due to its potential for severe side-effects. In these areas, therefore, Merck also donates Mectizan to treat LF as well as onchocerciasis. As part of the Global Programme to Eliminate Lymphatic Filariasis strategy, WHO recommends the co-administration of albendazole to Mectizan for annual mass treatment in communities where LF is endemic. A single annual dose of the two drugs has been found to effectively reduce the microfilaremia for one full year after treatment. This regimen was designed to interrupt disease transmission after five rounds of administration, with the possibility of disease elimination.

Mectizan is effective against river blindness and LF because it kills the juvenile parasites (microfilariae) produced by the adult worm, thereby reducing the patient’s microfilarial load. Following a single-dose regimen, the microfilariae reduction is maintained for 12 months in onchocerciasis- and/or LF-infected persons. The drug produces only mild, short-lived post-treatment effects in some individuals (e.g., itching, swollen lymph nodes, fever, etc.). This unique profile makes Mectizan well suited for annual, large-scale, mass treatment programs for the elimination of onchocerciasis and LF.

Ivermectin, DEC, and Albendazole (IDA or “triple therapy”)
The new strategy to accelerate elimination of LF in countries where onchocerciasis is not endemic is implemented through the co-administration of ivermectin (Mectizan), DEC, and albendazole. GSK and Eisai are donating albendazole and DEC, respectively. The Mectizan Expert Committee has published a guide containing strategies designed to ensure fair and transparent allocation of this limited donation.

The Mectizan® Donation Program (MDP or the Program) is an international program working to eliminate ...

History of the program