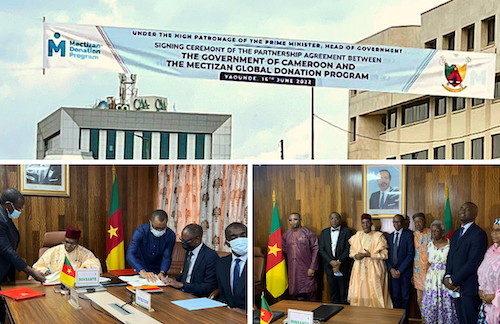 A new agreement has been jointly signed by the Ministry of Public Health in Cameroon and the Mectizan Donation Program (MDP) to renew their commitment to strengthen the partnership to accelerate elimination of onchocerciasis (river blindness) and lymphatic filariasis (LF) in the country.

In the agreement, MDP commits to continuing to make available, free of charge, enough Mectizan for Cameroon’s river blindness and LF elimination effort until the World Health Organization declares Cameroon to be free of both diseases.

The Government of Cameroon agreed to facilitate fee-free entry of donated Mectizan to the country and to implement the program by providing enough resources for effective distribution of the medicines to those who need them; monitoring and evaluation of progress; and post-intervention surveillance.

This high-level government commitment to success is a powerful development. MDP will be working with other partner countries on similar agreements.

“Ending neglected tropical diseases like river blindness will improve the quality of life for millions of Cameroonians, ensuring their ability to make a living and to contribute to the nation’s prosperity,” said Dr. Sodahlon. “Taking this important step demonstrates the government’s commitment to provide access to all Cameroonians who need treatment.”

These diseases are a significant public health problem in Cameroon, with 150 out of 190 health districts designated as endemic for river blindness, LF, or both—containing a population of more than 18 million people. An estimated 45,000 volunteer Community Drug Distributors located around the country facilitate the distribution of the necessary medicines along with NGO partners.

Cameroon’s river blindness control and elimination program began in 1991 and the LF program was launched in 2007. More than 460 million Mectizan 3mg tablets have already been provided by MDP. As part of its commitment to end these diseases in Cameroon, MDP has also contributed to building capacity for research, monitoring, and evaluation of progress through the creation and development of Pr. Joseph Kamgno’s Center for Research on Filariasis and other Tropical Diseases in Yaoundé.

The signing of this agreement is an important step to achieving the elimination targets set by the World Health Organization’s Neglected Tropical Diseases Road Map 2021-2030. It will also help to meet the United Nations Sustainable Development Goals (SDG), specifically SDG 3.3—to “end the epidemics of HIV, tuberculosis, malaria and neglected tropical diseases” by 2030.

“By working closely with the Ministry of Public Health, the World Health Organization, and other NGO partners,” Dr. Sodahlon stated, “we will end these two debilitating diseases in Cameroon.”